Article from The Courier, written by James Couzens | September 19 2021
From the age of 15 until now, Ballarat’s Russell Shaw, 52, has suffered from debilitating depression. Dark thoughts often cross his mind.

Yet, as a young person living in south-east England, Russell experienced no catastrophic personal circumstances which would perhaps explain his illness. There was no abuse, no drugs, no violence, no alcoholism.

Not even time spent working in New York City, mere kilometres from the World Trade Centre when the infamous terrorist attacks occurred in September 2001, has been linked to Russell’s mental health.

“I don’t think 9/11 had any real lasting effect on me,” Russell reflected.

“I saw the first tower come down with my own eyes. The smell didn’t go away until the day we left. We left in December and you could still smell the ash and the burning.”

As Manhattan became a desolate urban wasteland, Russell observed the actions of those still on the ground, many of whom were the antithesis of the heroic emergency workers portrayed in the media.

“None of that got reported outside (the USA),” Russell observed.

“It disappointed me, (but) it didn’t surprise me.”

Russell does not have the highest opinion of human nature.

Prior to the apocalyptic scenario occurring in the United States, Russell had led a largely ordinary life, unspectacular and humble.

At the age of 6, his parents moved to the British countryside. His father, aged 80, and his mother, aged 74, remain there to this day. Russell attended a tiny primary school with nine students in his class. He progressed onto secondary school which, while not overly enjoyed, was tolerated.

“I did alright there, didn’t have any dramas,” is how Russell described that period of his life.

“I had a good childhood. Raced motorcycles, absolutely loved it. My parents were always supportive.”

Russell has vague memories of a situation when he was 15 or 16. He completed a mock exam, receiving an impressive 96%. Called in by his teacher, he was informed that his performance was “off the chart” and, for some reason, his score needed to be dropped to 92%. This had an impact.

“I’m actually good at something and they’re going to screw me over on it,” the then-teenager thought at that point.

With no university aspirations, there was little trouble finding employment during a prosperous 1980s. An apprenticeship as a lithographic colour proofer was begun. Russell was in that field for eight years. He proceeded to work in desktop publishing for four years. It was during young adulthood in which the cruel depression began to take hold.

One day, at the age of 21, Russell broke down at work. A superior asked if he had spoken to his mother about his challenges.

“It’s not her problem,” the junior employee stated.

“Of course, it’s her problem. She’s your mother,” the superior replied.

This interaction served as a revelation for Russell.

“I thought everyone suffered like me. I thought it was normal,” Russell remembered.

“That was the first time someone said, ‘That doesn’t sound right to me’.”

The internal struggles became more frequent and problematic. Russell’s time at the desktop publishing business ended as a result.

“I left there on the advice of my psychologist to just get away, stop and take a break,” Russell recounted.

In 2003, Russell and his wife moved to Australia. The change of location did not ease Russell’s perpetual anguish.

“With depression, as I’ve been told by numerous psychologists, it can just be a disease,” Russell said.

“I’ve been to see so many different psychologists, doctors, psychiatrists and all of them have tried to suggest there was something in my youth or life that has affected my depression. None of them have been able to find anything. It can just be a chemical imbalance; it can just be how your brain works. It just happens.”

“I can now recognise (depression) in my father years ago. When he was suffering in his twenties and thirties, he wouldn’t have known what was going on.”

In 2021, even after years of assistance and medication, bad days are still had. One was suffered last weekend.

“(Sunday was) one of those days which got worse and worse,” Russell described.

“I’ve got a bad back at the moment so I can’t do what I want to do. I wanted to do something, but I couldn’t because of my back, but then my back, over the course of the day, affected my brain and I was in bed by 7pm. Going to bed is just like giving in. If I’d been on my own, I’d probably have been lying in my bed all day.”

In his darkest of moments, Russell has considered the unthinkable, but his love for his wife and two children keeps him going.

“The only reason I’m still here is my wife and two kids,” Russell said.

“My wife and kids do not deserve the pain it would put them through. So, all the time I have that conscious understanding, I’ll still be here. I’ll suffer the pain and I’ll suffer the bad days. The love for your children is greater than the love you have for yourself. The pain it would cause the people who love me is ten times worse than the pain I think I’m saving myself from.”

Additionally, to help cope, Russell looks forward to impending events, even if seemingly minor in scale.

“You pick little things of positivity in the next day to get you to the next day,” he said.

Russell wants those who are struggling to seek help, sooner rather than later. There is no sense suffering in silence. However, finding the right person is crucial, as is a willingness to persist.

“It’s really important, you have to be able to trust the person you’re going to speak to,” Russell said.

“I can tell, if I’m seeing a psychologist, in the first session whether I’m going to go back. The problem there is, a lot of people will see that person and think, ‘Waste of time’. They won’t be able to say, ‘You know what, I’ll try something else, I’ll look further ahead’. It’s getting people to understand if that one thing doesn’t work for you, try something else. It wasn’t a waste of time. It was time spent realising that’s not the sort of person you need to see.”

The forthcoming arrival of Ballarat Men’s Mental Health will be of great benefit to the town, according to Russell.

“One of the biggest problems I’ve always found seeing psychiatrists, psychologists, they get to the end of the session and they go, ‘That’s it; time’s up’,” Russell said. 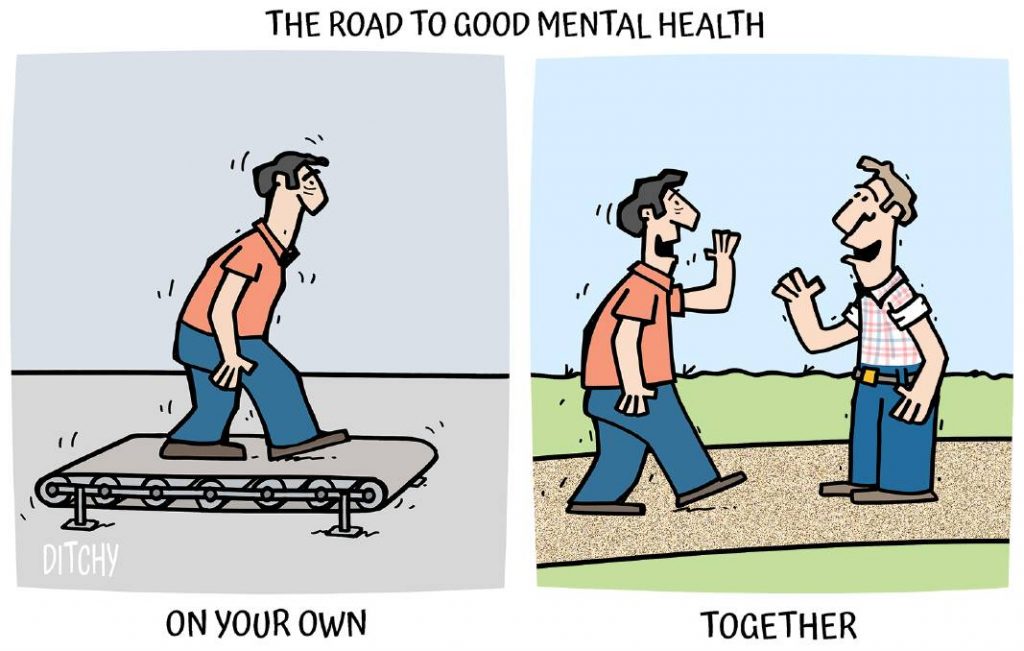 “They have to do that, but if you’re not ready to stop talking, it’s really difficult to get up and say, ‘I’ll see you in a week’s time’. A week’s time could be too late. A service like this will save lives.”

The new service, for which $500 000 is required to become operational, will assist in providing potentially life-changing early intervention.

“There’ll be a lot of guys who can’t function and they’ll either take it out with drinking, violence, drugs, or taking their own lives. Even if the service can’t help, it can say, ‘Try this; try that; keep going forward’.”

Russell is able to look back on his younger years and consider what might have been if appropriate and effective resources had been in place.

“If something like Ballarat Men’s Mental Health had been available to me at an earlier age, it would have made the rest of my life a lot easier rather than (someone) saying, ‘Take a cup of concrete and harden up’,” he said.

Russell knows full well the significance of help for those with mental illness.

“There is no cure. But, with the help of people, medicine and mental training, you can live a perfectly decent life,” Russell said.

“Catching depression early is important and allowing people to know that there is help there at an early age is vital.”

Service to help men in need

The suicide rate amongst Ballarat males has compelled a group to establish a service to provide assistance to those in need. For chairperson Andrew McPherson, the rationale behind Ballarat Men’s Mental Health is clear.

“We set up with the intention of trying to support men and their families with mental health issues or who are at risk of suicide,” Mr McPherson said. “We are hoping they don’t get either lost, or stuck, in the system.”

Ballarat Men’s Mental Health aims to receive funding from traditional sources, but these sources will be insufficient.

“For the most part, (government funding) ties you in to a particular way of operating,” Mr McPherson said. “We recognise it’s all the other things you need to do that the health system doesn’t tend to fund particularly well or at all.”

Mr McPherson estimates an initial amount of $500,000 is needed.

“(This) will allow us to hire a service manager and the staff we need to operate and a figure like that annually to continue,” he said.

Grassroots donations will be essential, according to Mr McPherson.

“We want to be seen as primarily a community-funded organisation,” he said. “If we can get a lot of donors, maybe as many as two thousand local people just putting in a couple of dollars a week, that would go a huge way towards funding our service.”

“We consulted with men and their families who’ve had experience of the mental health care system,” Mr McPherson said. “We also interviewed people from mental health services.”

Regardless of what historical and cultural factors might have contributed to the disproportionate suicide statistics, Mr McPherson knows there are problems in Ballarat which need to be tackled.

“The reasons behind it may not be as clear, but the statistics don’t lie,” he said.

Donations can be made at ballaratmmh.com.au

Prominent members of Ballarat’s building industry know it is important to provide support to those in need. With this in mind, key members of the Master Builders Association of Ballarat, David Rowe and Stuart Allen, have handed over a $1500 donation to Ballarat Men’s Mental Health, accepted by Andrew McPherson.

“Of late, the committee’s focus has been on mental health support and suicide prevention in the construction industry,” Mr Allen said. “There is such a need for the services BMMH looks to provide so to help them in their infancy is something that MBAB is proud of and looks forward to continuing.”

The Master Builders Association committee has seen a need for men’s, and tradesperson-specific, help in Ballarat for a number of years. Prior to the pandemic, it had run mental health awareness breakfasts for tradespeople in conjunction with Mitre 10, Hope Assistance Local Tradies, and support services. An evening for partners of tradespeople had also been held at the Golden City Hotel.

“We have all known and know people who are struggling, or have taken their life,” Mr Allen said. “We would like to help and provide support in some way.” 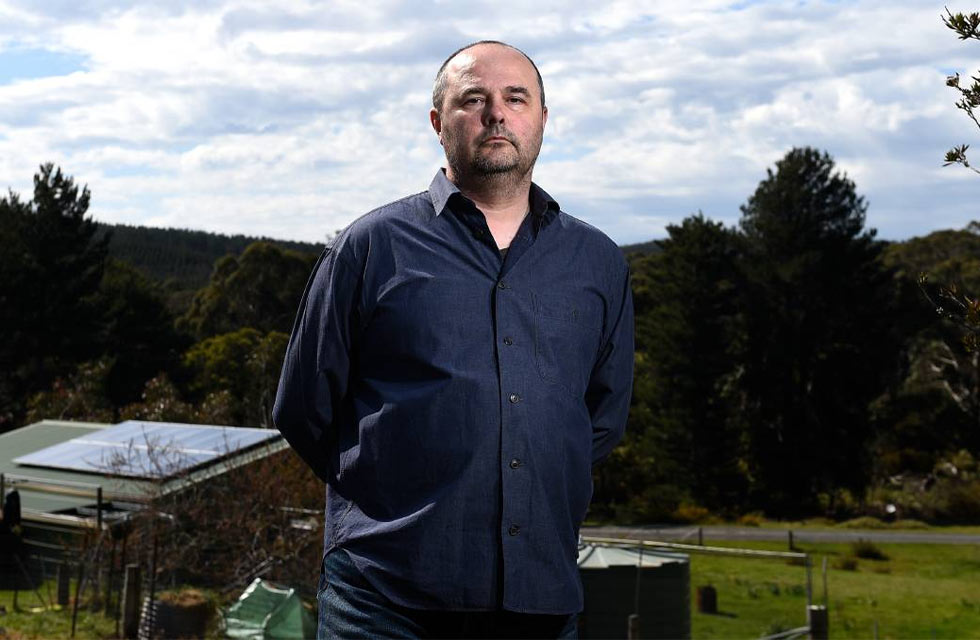 In order to become operational, BMMH urgently needs your help.

Individual donations are tax deductible and will go directly towards our start-up costs and, then, our operations.

No matter how large or small your contribution, you’ll know you will have helped Ballarat’s men to access vital mental health support.